The Memory Tree sculpture that is on the entrance wall is made up of bronze, aluminum, and copper leaves that can be inscribed with the names of those who have passed away at the Hospice House. Family members or friends who want to honor the memory of those people who were dear to them can purchase a leaf to memorialize their loved one.

Service League members set tables on the fourth Thursday of each month to serve a meal to all Hospice House guests. Gail Joyner, Donna Moore, Beth Beasley, and Betty leRoux served a meal in February.  Ellen Crawley, Anna Fay Campbell, Mary Lou Cherry, and Barbara Bowser served guests in March.  Our current Chairperson, Betty leRoux, provides sign-up sheets on the back tables at the general meeting for members to sign up to serve a meal.

On Thursday, April 11, 2019, Hospice volunteers were honored for their service.

Memory Bear workshop is scheduled for May 11, 2019. Sewing experience is NOT required.

Although Service League of Greenville members are currently on summer break, when a helping hand is needed for the second annual Ronald McDonald House of Eastern North Carolina Telethon we find a way to be there.

Ronald McDonald House of Eastern North Carolina is an independent, community supported 501(c)3 nonprofit organization that provides a temporary “home-away-from-home” for families of children who are receiving treatment in our community’s medical facilities.

Service League of Greenville volunteers were hard at work in the months of —  March, April & May 2018.

Here are just some of the ways our members shared their Service League time and talent with their community:

A few picture highlights from March – May

Wilma Shackelford gives her report at May general meeting

SLG member Elizabeth Stetson shoulder-to-shoulder with the pros at the Cancer Center opening.

The Service League of Greenville is on its summer break, but the new board already got a jump on the 2018-2019 year with a New Board Welcome Retreat.   Surrounded by amazing views of Chocowinity Bay and the Pamlico River, board members had the opportunity to meet and greet each other and share a delicious twenty-two salad feast… 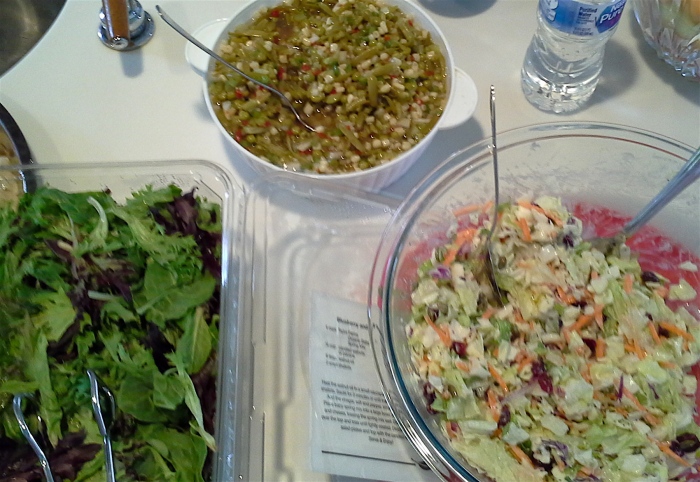 Then it was time to get down to the business of asking questions, discussing ideas, presenting new opportunities for SLG to explore, and identifying challenges that may lie ahead.

A huge SLG thank you to Communications Chair Susan Thornton for spearheading the retreat, President Ann Taylor for her leadership during the retreat, Treasurer Janiffer Fraizer for hosting the event and creating the perfect environment for everyone to connect and feel energized. And to all who attended for their wisdom, enthusiasm, laughter, and salads!

Working in one of the Service League of Greenville gift shops we never know who or what we’re going to encounter.  Sometimes, it really makes our day…

I met Hamilton, a therapy dog at the cancer center, and his owner Brittany.  They stopped by to see our Hope & Caring Boutique.  Hamilton is such a great therapy dog.  He is deaf and only has one eye.  He is a Great Dane and is 6 years old.  There are about 6 therapy dogs that they (recreational therapy department) use at the cancer center.  I loved the picture they took because it has the outside of the shop and the shop plaque above us… I just loved that dog!

Back in March, The Daily Reflector did a wonderful article on Brittany Dail and Hamilton highlighting their therapy work and efforts to educate others about responsible pet ownership and special needs pets.

Here’s a video from the article:

A huge Service League of Greenville thank you to Brittany and Hamilton for their amazing service to our community by bringing comfort and joy to patients and helping to make pet ownership better for pets and people.

( Please check out the full online article at the Daily Reflector — CLICK HERE.) 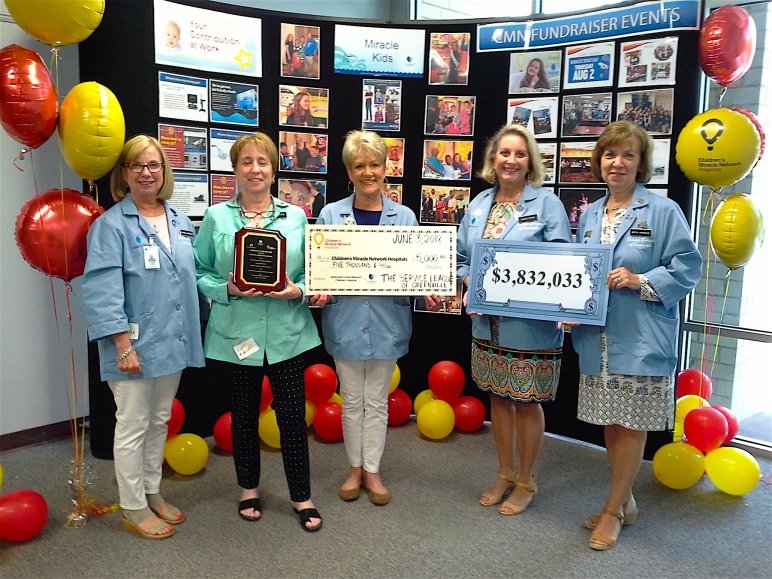 The Service League of Greenville continued its decades of support for the Children’s Miracle Network by working the phones during the 33rd annual telethon and delivering a donation for $5,000 on behalf of our members.

Over its 33 years, the CMN telethon has raised an impressive $27 million to fund everything from neo-natal medical equipment to special designed/educational books and toys. The Service League of Greenville has proudly contributed nearly $4 million of that total.

Our thanks to all who found some way to participate and/or contribute to CMN this year!

It is with great pride and honor that The Service League of Greenville announces its sponsorship of military women attending the 2018 Military Women’s Health Symposium.

The interdisciplinary conference is to raise awareness of the unique health needs of active duty and veteran women and to improve care by updating providers on best practices in screening, prevention, and intervention of health conditions specific to military women.  It is a combined effort by Vidant, the VA, EAHEC and Duke AHEC.

And, what better way for our new SLG President, Ann Taylor, to start her two year term, then with a $5,000 donation from The Service League of Greenville to 2018 Military Women’s Health Symposium.  The funds will help cover the meals and ticket costs for veteran and active-duty military women. 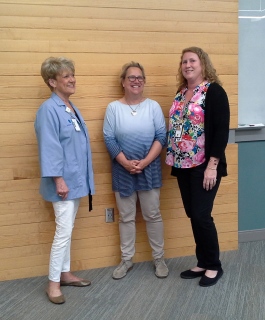 As we continues to celebrate our 80th year, it is inspiring to know The Service League of Greenville is still finding opportunities to serve our community in new ways.

Our Annual May Luncheon is a time when we recognize our members and their many individual and collective accomplishments within The Service League of Greenville. There was much to celebrate for the 2017-2018 year as our outgoing President, Annelle West, presided over the final meeting of her tenure and a delicious meal at Rock Springs.

We announced the establishment of the SERVICE LEAGUE OF GREENVILLE scholarship — an endowment for a medical or nursing student in the Brody School of Medicine. With Mark Notestine, President, ECU Medical and Health Sciences Foundation President  and Jeff McPherson, Director of Development, ECU Medical and Health Sciences Foundation on hand to accept the “big” endowment check for $200,000. 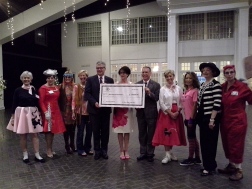 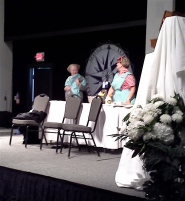 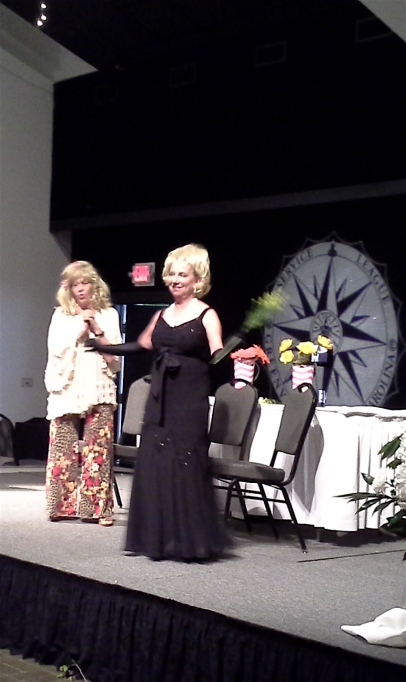 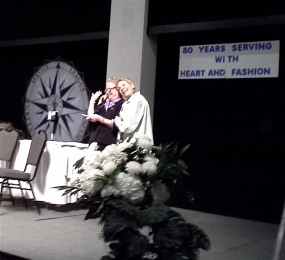 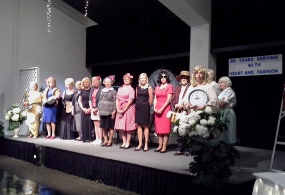 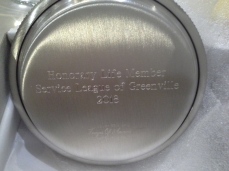 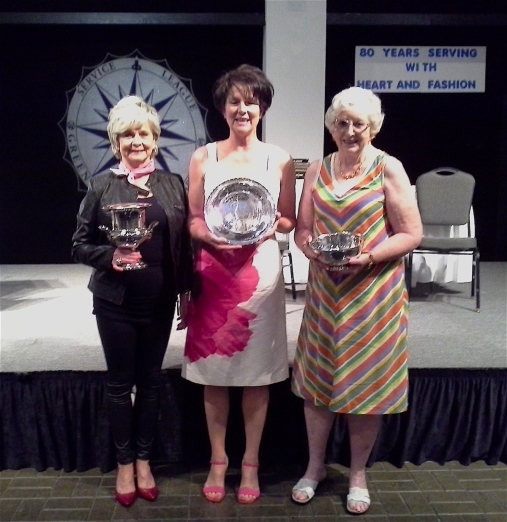 We set the wheels of change in motion by installing and welcoming our new Service League of Greenville President, Ann Taylor; 1st VP, Danette Pugh; and 2nd VP, Wendy Farrior. 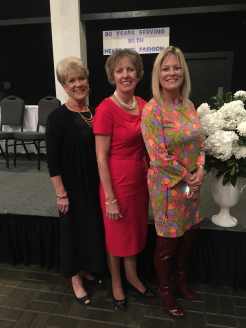 And last, but not least — To each and every member of the SERVICE LEAGUE OF GREENVILLE:

Congratulations on a year of amazing accomplishments.  And THANK YOU for all that you do.  You are indeed wonder women!!

Rock Springs Center was a buzz as the Service League of Greenville celebrated — with heart, passion, and fashion — eight decades of service to our community during our Annual May luncheon. 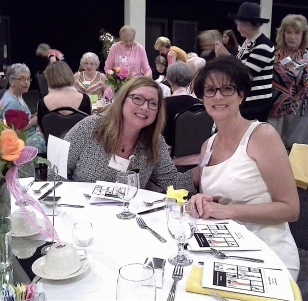 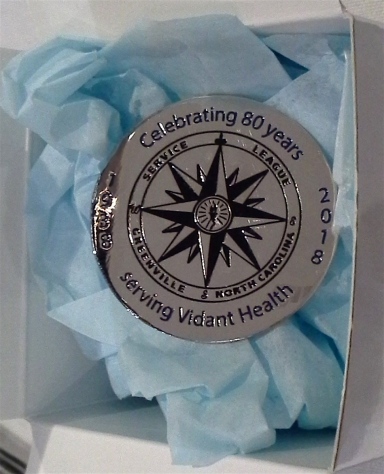 To celebrate in true “Service League Style”, Members picked a decade — from our formation in the 1930’s to the present day — and dress the part.  Needless to say, the results were colorful, creative, and fun! 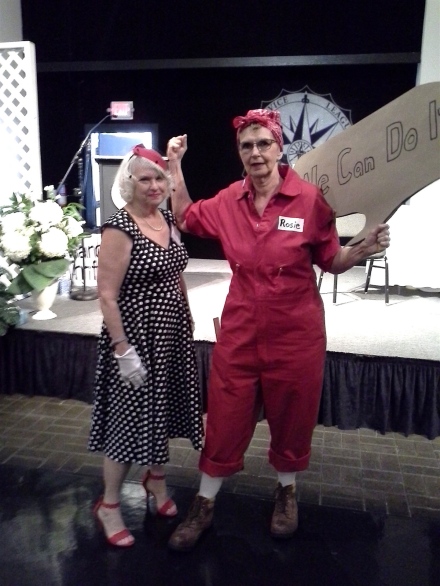 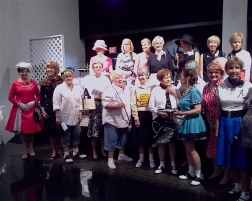 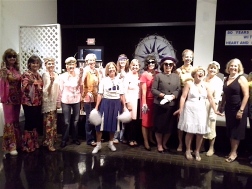 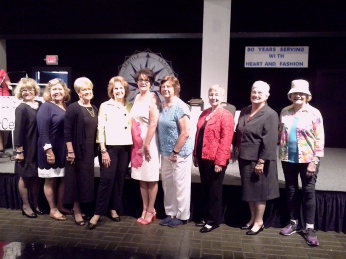 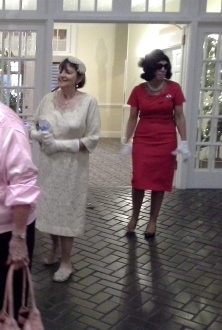 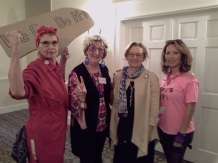 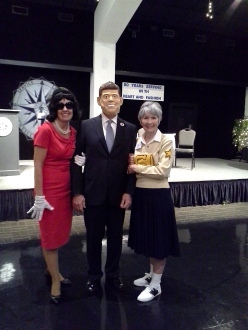 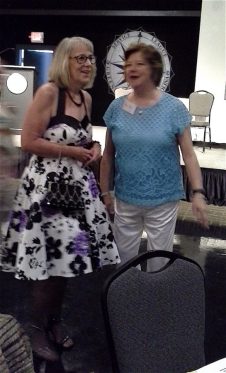 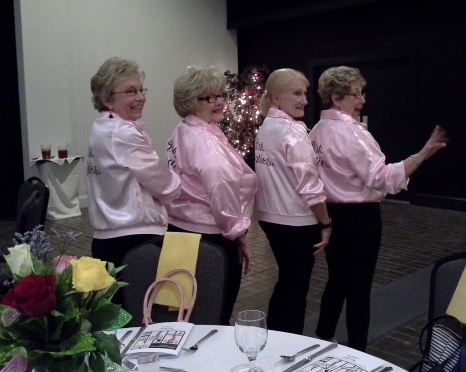 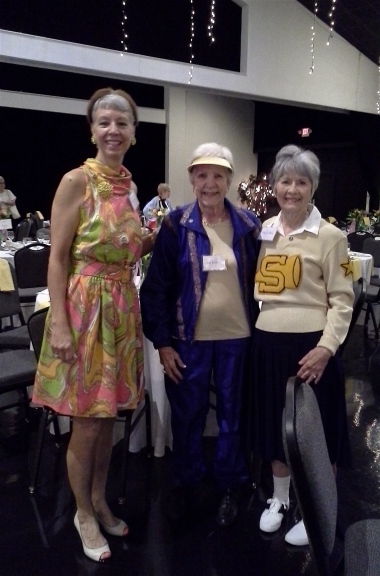 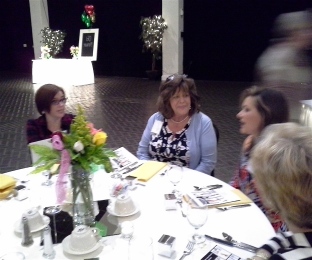 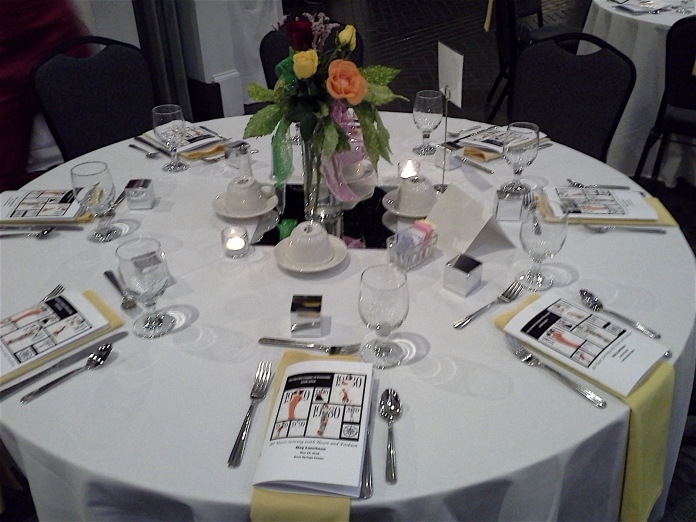 And here is to 80 more years of heart, passion & fashion from THE SERVICE LEAGUE OF GREENVILLE! 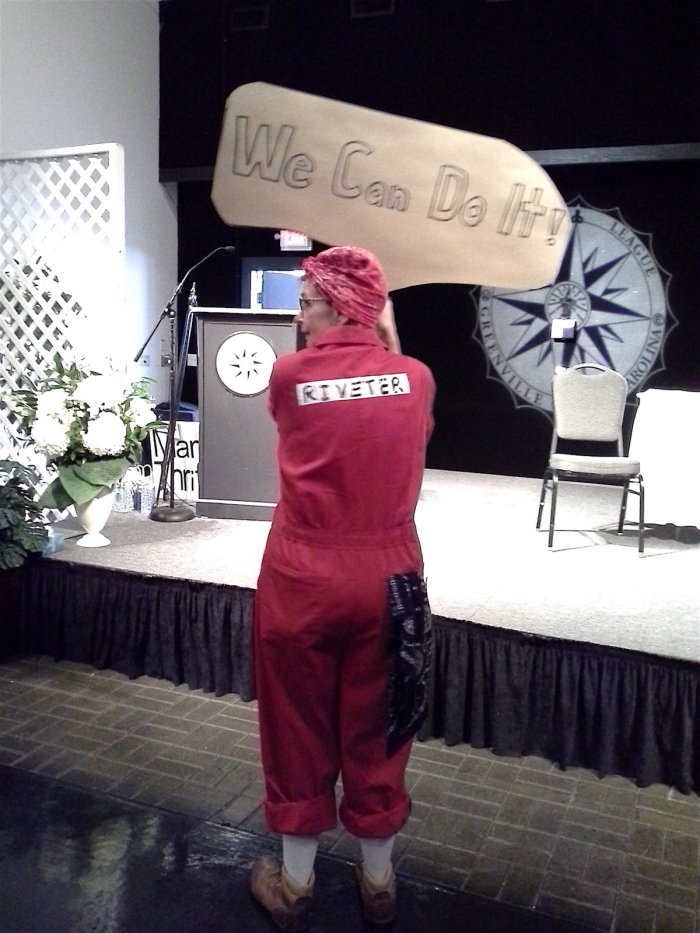 The Service League of Greenville was featured in the Vidant Health Foundation newsletter, THE GIFT:

“The Service League of Greenville made their first $300,000 payment towards a $2 million pledge to help fund Vidant Medical Center in Greenville.  This contribution to the new facility is the group’s largest to date. Through their generosity, the Service League of Greenville chose the public healing garden as the area to give towards that will provide tranquility and peacefulness to cancer patients and their families.”

Our beautifully worded greeting at the entrance to the healing garden speaks to the Service League of Greenville’s commitment to the health and wellness of our community.

Enjoy many more pictures of the Service League of Greenville, healing gardens and Cancer Center  at jennifarrow.com.

The Service League of Greenville was also honored by a lovely THANK YOU cake from Vidant Health Foundation at our May general meeting delivered by Blaire Vick, Event Coordinator along with Bobbie Lapiejko, Director Annual Giving and Crystal Corbett, Major Gift Officer. 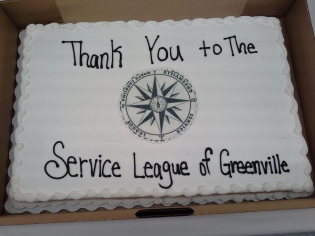 Past President Mary Lee Hobbie Speaks from the Heart

Thank you league volunteers for decorating the tree at the Hospice House! Great job!
Today’s blanket workshop was a success! Over 14 blankets were made and more were prepped ready to be completed. Thank you ladies!!
Yesterday was The ECU College of Nursing Scholarship Recognition. The Service League awarded two to Nursing Students. They are Yhaani Joyner who is in the picture and the other recipient Latita Williams was not in attendance. Congratulations to these two exceptional students! Pictured is Dr Phyllis Hornes, Yhaani Joyner, Cassie Causey, CON Dean Dr. Bimbola Akintade, and Karen Gagnon.
Another delivery of goodies to the Hope Lodge from the League.
Loading Comments...
%d bloggers like this: